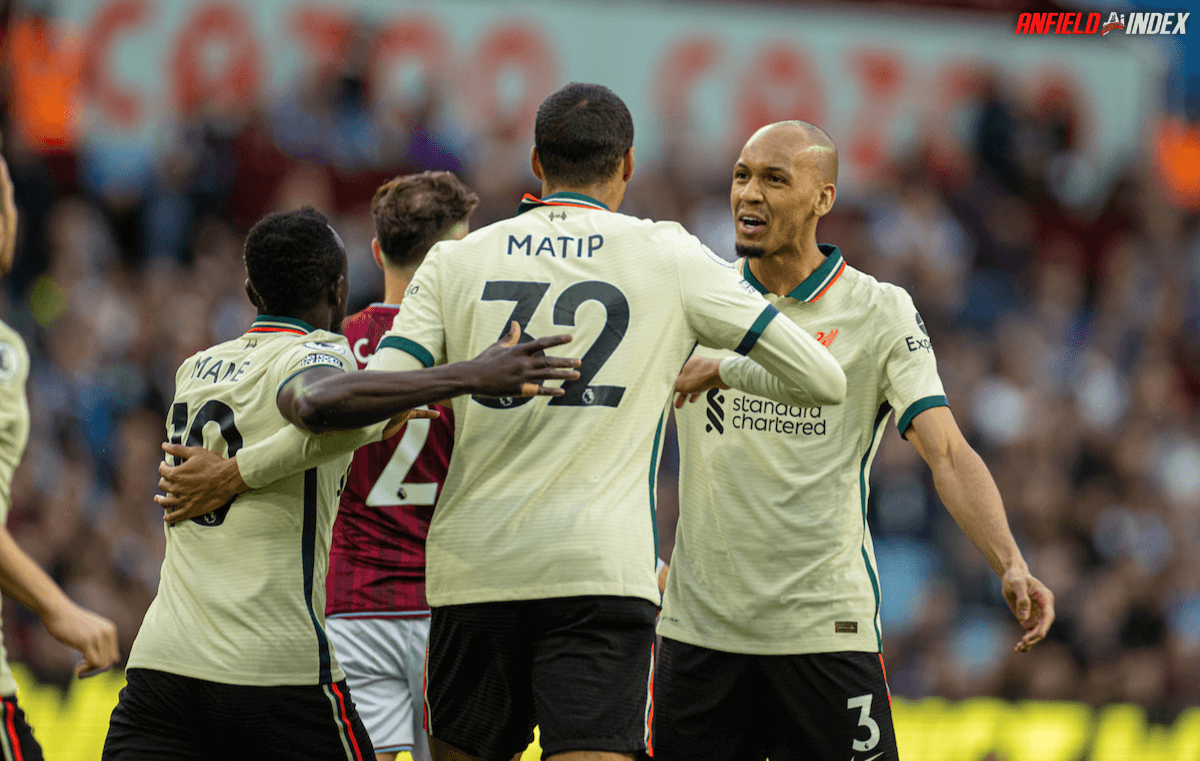 A frenetic start saw Liverpool go behind, and Ali could probably have done little more to stop it. Nearly gifted an open goal, with an amazing pass into Watkins early on. Had little else to do in the second half as the Reds controlled, but was alert to stop Ings late on.

Showed good defensive awareness, as Villa looked to exploit the wide areas. His dangerous delivery started to explore the Villa box, and Keita should have done better midway through the first half. He looked lively in the second half, if less industrious than normal.

He struggled at the start, and his collision saw Virgil unable to stop the opening goal. His delivery was often sporadic, as he looked to grow into the game. Was guilty of hesitation at times in the second half, as his game faltered a little, but a last ditch challenge on Ings was exactly what he needed.

Made up for the opening goal by creating the opportunity for Matip’s equaliser. His composure soon calmed, and early in the second he slipped but recovered brilliantly to stop a break. Controlled the backline as the Reds ramped up.

On the score sheet, and a crucial goal to level early on. Defensively he looked a little casual, as Villa attacked with intent from the start. A lovely honking run just before the break was a brilliant thing, as he grew into form. Was mostly untroubled for the remainder of the game.

Neat and tidy from the outset, he was always showing for the ball. A nice pair of curling shots just before half time was the highlight, as he showed his strengths on the ball. Looked the most threatening into the second half, without producing too much. Was the logical switch out when Thiago was needed.

A lovely facilitator, and looked to set a tempo as the game settled. Should have scored off a Trent delivery, as he eased his way into the game. Did his job well, but struggled to impact in the final third despite the Reds heavy possession. A beautiful strike near the end was nearly the game’s stand out moment.

Looked to bully early on, and dominate his zone. His touch on the ball was suspect, and he started to get caught out in possession. Succumbed to a worrying injury on 28 mins, that will have the fans panicked.

Was lively whenever the ball came his way, and his early runs caused problems. Drifted in and out of the game, as his impact appeared less from the right, and became a performance of moments. His switch to the right saw him provide a peach for Mane’s goal, as Liverpool picked up.

Was eager and busy in his work in that central role, with a desire to eradicate the weekend’s performance. Had a great header chance go just wide, as the first half settled for the Reds.

Showed real intent in the opening goal for the Reds, was lively and keen to impress. His game was that of few moments, and little came to fruition as Villa dug in.

Brought on early, under unforeseen circumstances. Looked confident and comfortable, as the rReds started to dominate.

Was able to come in and oversee that vital second goal, and control the game.

Came on and nearly scored immediately.

Rung the changes, as the Reds hunted a vital three points. Had to rotate, but maybe too many changes disrupted his side as they laboured through the opening exchanges. Was forced to take Fabinho off, with the abundance of minutes played finally catching up. Henderson was the obvious sub on, and as Thiago entered, so did the second goal for the Reds. He has done well to navigate yet another game, but the Fabinho injury will have him worried.