Johnny Depp is making headlines again with the revelation that he has a new girlfriend, but his 23-year-old daughter Lily-Rose Depp is turning heads for another reason.

The Parisian-born model-turned-actress took to Instagram on Thursday evening, looking striking as she posed in the tiniest blue frilled mini skirt and white tank top for a selfie. Lily, whose mother is Jonny Depp‘s ex-partner Vanessa Paradis, looked edgy with her blonde hair scraped up into a tight top-knot with a bold red scrunchie. A fierce French manicure completed the daring look.

The surprise selfie came amid the news Lily’s father Johnny Depp and his former lawyer Joelle Rich are not only a couple, but they were hiding in plain sight for months.

RELATED: Johnny Depp’s lawyers speak out over Amber Heard’s appeal: ‘It was expected’

Despite not having any official role in the movie star’s infamous defamation trial against ex-wife Amber Heard earlier this year, Joelle was photographed at the Fairfax County Courthouse in Virginia nearly every single day of the weeks-long trial that ran from April 11 to June 1. 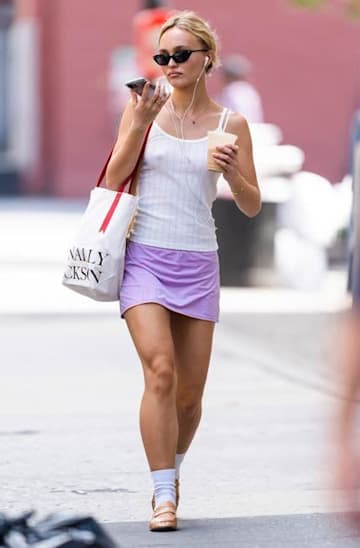 Meanwhile, Lily-Rose is determined to keep all eyes on her as she is busy promoting her new TV series The Idol, which marks her debut lead role.

Earlier this month, Lily-Rose took to the New York City streets looking very Sex In The City in her lilac mini-skirt, cute brown brogues and socks with shopping bags and iced coffees in tow. Lily looked super chic as she swept her blonde hair up into an effortless chignon and seemed engrossed in a phone call.

Lily-Rose continues to wow her fans

Last month, Lily-Rose took to Instagram and wowed fans with a striking lingerie post. Clad in pink lace and a bustier, she wore her long hair loose and pouted as she flipped her tresses.

She captioned the photo: “Jocelyn @theidol,” with a red heart emoji and fans went wild, commenting: “WOW,” and another wrote,“Goddess with a vengeance”.