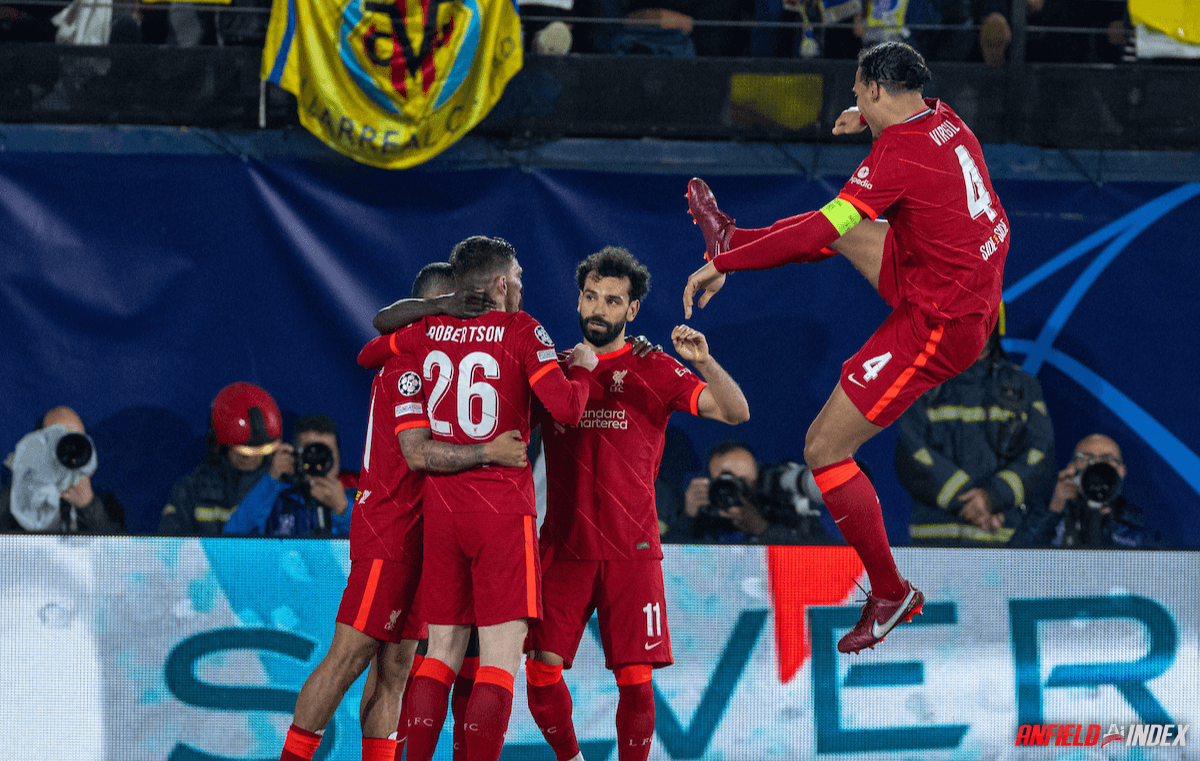 Dear Reader, this writer had the pleasure of watching Liverpool vs Villarreal on BT Sport. After a torrid first half in which the Reds were stunned by a daring tactical approach by knockout king Unai Emery (more on that later), there was something of a theme for the coverage. “Bring on Henderson”, “need the captain’s experience”, “there has to be personnel changes from Klopp”. The consensus seemed to be that Liverpool’s midfielders had struggled, particularly Naby Keita, and therefore substitutions were needed urgently to fix these individual failings. As the second half began, the match commentators echoed the pundit’s wisdom. “I’m very surprised not to see Henderson on”, “that’s what I would have expected from Jurgen Klopp”.

It was all a little short sighted. The Reds scored 3 goals to overcome the 2 they’d conceded, controlled the game, and didn’t concede a single shot. Naby Keita was superb, as was the whole Liverpool team. There had been one change at half-time, Luis Diaz coming on for Diogo Jota, but this hadn’t been suggested by anyone during the interval. None of this is to disparage Jordon Henderson, dear reader, in fact this writer considers himself a great fan of the captain. But what this whole discussion had displayed was the constant obsession with individual and personnel changes in football. Pundits in the traditional media and fans on social media, all were enthralled by the allure of the blame game. But sometimes, it isn’t anyone in particular’s fault. Sometimes its a collective issue, one that requires a collective solution. And so it proved.

So what the hell happened then? First, lets look at Villareal’s approach to the first half. There were two main themes that Emery emphasised: an ultra-aggressive man-oriented press against the ball, and wide overloads against the Red’s fullbacks in possession. The former was to prevent Liverpool controlling the tempo of the game. Emery knew he couldn’t afford to play on the counter, and that meant forcing the issue high up the pitch. The Yellow Submarine played with a high line and applied direct pressure to Liverpool’s players in buildup, marking tightly to any short passing options and trying to squeeze the play onto one side. To do this they used a 4-2-2-2 shape, with Lo Celso and Coquelin as the 2 behind the strikers. The two up front would force Alisson to pass sideways, and then the the other stiker would chase down the receiving centre back. Meanwhile, Lo Celso and Coquelin would close down the near fullback and Fabinho. With all of (usually Van Dijk’s) short passing options covered and a striker closing fast, they hoped to make Klopp’s team play long and win 1v1 battles at the back.

With Liverpool’s 8s marked by the two central midfielders, this left the far side fullback as the open player. If this looked like it might be used, however, the closest midfielder would run over to cover it, and the spare centreback would move up to cover their 8 instead. So there were broadly two options available to beat this press. Either get it to the far side fullback before they could be closed down, or use the threat of that to create a 3v3 at the halfway line, then play deliberate passes into the forward players to win 1v1 battles. Obviously, they didn’t make this happen in the first half. The result was some awful passing and losses of possession, as players were constantly receiving under huge man marking pressure and giving the ball away.

Part two of the Emery master plan was wide crosses. Rather than having his striker’s stay central, Emery had them drift wide, especially Moreno who often found himself outside Robertson. Long balls out to him meant he could win in the air, hold up play, and help them move up the pitch beyond pressure. Once near the box it was a similar story. For the first goal, Coquelin (who had made a diagonal run into the right side of the box) played a cross over the head of Trent Alexander-Arnold for Dia. It was overhit, so Dia picked it up and recycled, before Estupinan played another one from the left, again beyond Robertson this time, where Capoue had had made a run from very deep to overload the back post. The second goal was a mirror image. A long diagonal pass behind Robertson, picked up, then crossed back the other way to Trent who was beaten at the back post.

So this was the problem laid before Klopp and his coaching staff. They had to find a way to protect against the passes over the head’s of their fullbacks, and they had to figure out a way to play through the intense Villarreal press. If they could do that, the rewards would be great, as Emery’s strategy inherently left them very exposed at the back, a necessary risk when starting from a 2 goal deficit. The key then, was to take the advice of Douglas Adams in The Hitchhiker’s Guide to the Galaxy. Don’t Panic. The solution was there, they just needed to execute. And they did so with aplomb.

First, Van Dijk and Konate took more authority over the long balls. Rather than letting the fullback deal with them, the centre backs stepped out to win the headers while the fullbacks stepped back to cover. This fixed the defensive issues and halted most of Villarreal’s threat. Second, they started using the 1v1 situations at halfway to their advantage. This is why Diaz was subbed on for Jota, as his ability to receive and retain the ball is arguably the highest in the squad other than perhaps Salah. With plenty of open space to work with, the forwards could move around flexibly and create their own separation from their man, either by dropping off or running in behind.

From there, the Villarreal press was broken, and once this had been achieved Liverpool could then begin playing their normal game again, finding Keita between the lines and building their normal patterns of play. The substitutions did eventually come, but as rotation, to keep up what had been achieved and maintain intensity. I hope, dear reader, that you will join this writer in congratulating the Reds on their mentality in a stressful situation, and keeping faith in them to deliver. Don’t Panic.