Home » The officials are biased? Every 2021/22 Arsenal game analysed for referee or VAR decisions The officials are biased? Every 2021/22 Arsenal game analysed for referee or VAR decisions

There are Gooners who believe luck was the only reason we didn’t finish top 4. by Dan Smith

Injuries is one excuse used. Yet I only recall Partey, and Tierney as having long term issues, and let’s not pretend Partey being unavailable is like having Patrick Viera out.

The fact is Arsenal are not unique. Every squad has absentees, and unlike the 4 clubs who finished above us, we didn’t have a European schedule to organise.

We also went out of the FA Cup in the third round, meaning most of the campaign we only played once a week.

In February we only had 3 fixtures.

The other theory going round our fanbase is refereeing decisions have gone against us. Some supporters will say this tongue in cheek but make no mistake, those who mean it do exist.

Ask supporters of any club and they will tell you decisions always go against them. In reality, officiating is poor in the UK but it’s balanced. My stance has always been how can I complain about the manner of how our undefeated streak ended at Old Trafford without acknowledging the Pires dive Vs Portsmouth in the Invincible campaign? Or preach about a Champions League campaign ended due to Van Persie wrongly sent off yet not mention Eboue diving in the final?

Everyone is entitled to their own opinion, but sometimes it’s hard to look in the mirror and take accountability, I think it’s easier for some to hide behind conspiracies rather than admit we are simply not good enough.

We are not unique, there is zero reason for the FA, Premier League, refs, etc, to be sitting in dark rooms plotting our downfall? Why would they? For what benefit? Why would they concern themselves with a side who haven’t been in the top 4 for years?

This is the same governing bodies who accepted our application to postpone an NLD? If they had an agenda, why would they do us that favour? Would we be getting penalties at the Bridge and against United awarded if the objective was to cost us points?

Let’s though do an honest evaluation of our 38 fixtures and see how many controversial decisions went against us and how many points we should have had ….

Brentford – A … and Chelsea – H
Arteta would later admit surprise that these fixtures were not delayed due to 4 positive tests of COVID in the squad and non-playing staff. That doesn’t explain Leno grasping at air when trying to deal with a throw in! Or Lukaku bullying our back 4. Plus, Arsenal got a game postponed later in the campaign when they shouldn’t have

Man City – A
19 percent possession, not a shot on target and a team who melted the moment they faced any adversity. Then, one of the few leaders we have, loses his head and lunges in with a two footed tackle to get sent off.

Norwich – H
If there was a conspiracy would, in a tight outcome, VAR come to the conclusion that there was zero offside when Auba puts the ball in the net?

Burnley – A
A ref awards a penalty to the Clarets. VAR interjects and after checking with his monitor the ref decides that Ramsdale didn’t make contact with the player so reverses his decision.

So, for 2 fixtures in a row VAR goes our way.

Spurs – H
Spurs have a soft claim for a spot kick denied.

Brighton – A
We were largely outplayed in 0-0 draw .

Palace – H
Arteta feels that MacArthur should have been sent off for a lunge on Saka. Then he talks about how VAR should have intervened, more than our poor second half display .

Villa – H
VAR interject on the stroke of half time to give us a pen. If there’s a conspiracy, why does VAR keep doing this?

Watford – H
Another penalty awarded for the Gunners.
Why are we getting so many penalties if there is an agenda? We score when not giving the ball back after Watford put ball out of play for an injured player. Certain Gooners don’t mention that!

Liverpool – A
Outplayed yet again at Anfield

Man U – A
VAR corrects the referee showing that De Gea was knocked over by his own player. There is nothing contentious about Ronaldo’s pen

Everton – A
Toffees have two goals disallowed for offside thanks to video technology.

West ham – A
West Ham conceded a pen and have a player sent off.

Leeds -A
Leeds awarded a pen when we are 3 -0 up so this doesn’t cost us any points.

City -H
VAR doesn’t ask ref to look at Ederson bringing down Odegaard but in same area of pitch does advise Xhaka’s challenge on Silva to be looked at.

What I can’t defend is Gabriel deciding to body check an attacker knowing he’s on a yellow. We mentally crumble the moment we have to deal with adversity.

Burnley – H
Zero excuses from the majority in the Emirates who boo players off after goalless draw with team bottom of the table.

Wolves – A
Bizarre double yellow card within seconds of each other but that doesn’t mean it was wrong. 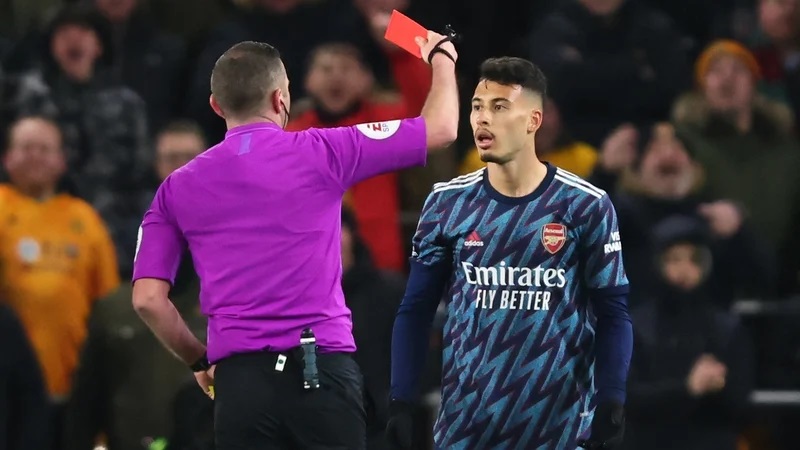 Brentford – H
Seems to be a foul in the build up to our second goal but not according to ref.

Wolves – H
Only talking point was our over the top celebrations

Watford – A
A game of great goals but nothing to debate.

Leicester – H
Another pen awarded for the Gunners

Palace – A
Arteta offers zero excuses, apologizing for the defeat and admitting it’s not acceptable.

Chelsea – A
If there was a conspiracy against us, we don’t get awarded the pen we do. If you think that’s a spot kick you can’t complain what happens in the NLD a month later

Man U – H
Both Pens are justified.

Leeds – H
We play over an hour against 10 men and just win narrowly.

Spurs – A
Arteta claims that if he says how he feels about the officiating he would be suspended. It’s a transparent attempt to deflect from a terrible performance. In reality Cedric doesn’t play the ball, and Holding is stupid to shoulder barge Son on a yellow card.

Newcastle – A
Outplayed completely. It is still hard to fathom how the players could be so unmotivated considering what was at stake

My surprise when approaching this with an open mind is how many penalties we were awarded, and in particular how many times VAR asked a ref to take a look at an original decision.

Most of our red cards were justified.

I can’t see that many fixtures where we were truly robbed because of an injustice? We were even allowed to manipulate a rule designed to protect squads from outbreaks of COVID.

I’m sorry, these things don’t happen if those in charge have an agenda.