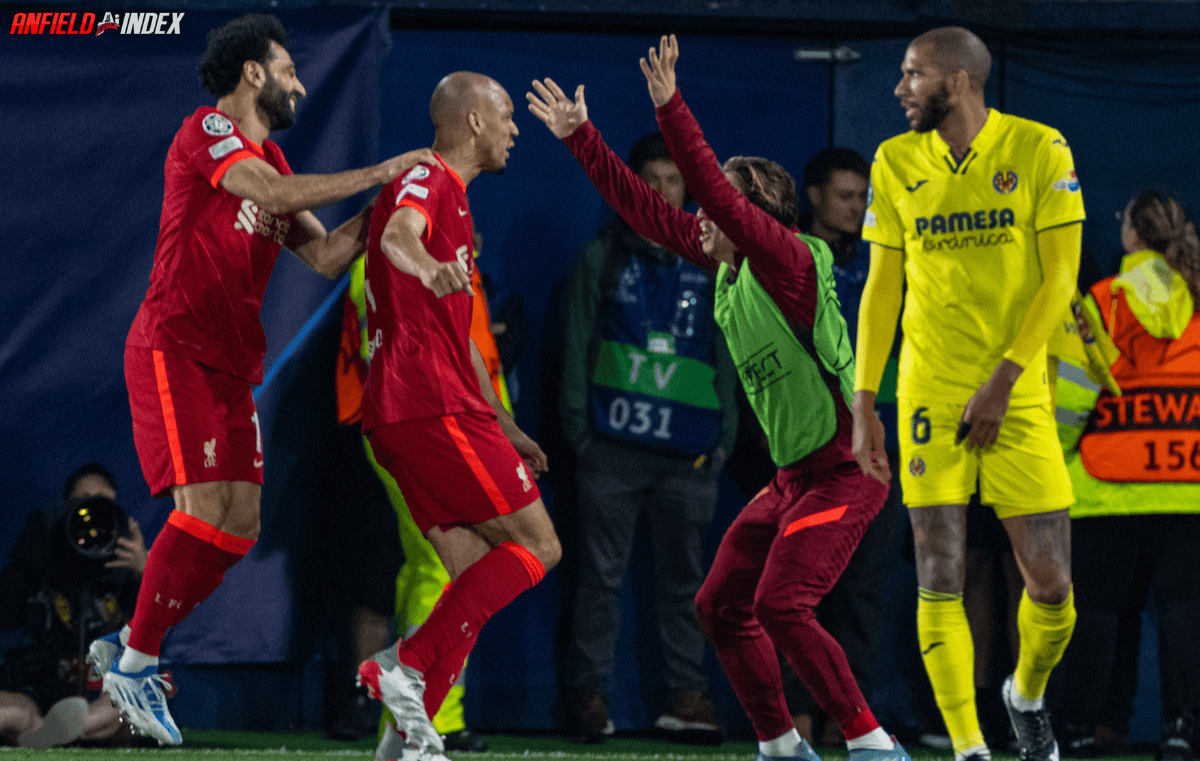 The most assured pair of gloves in football, and with no fault for Villarreal’s first half goals, made one brilliant one on one stop. Became a spectator until Liverpool scored, which was a welcome sight. Had very little from there to deal with.

After given a much needed breather at the weekend, the playmaking fullback came back in for Joe Gomez. He looked shaky, and unsure of how to play the ball through the opening half. Seemed intent on getting into a physical battle at times, and was poor for the second goal. Started to be more measured in his play, and even saw a deflected effort strike the bar at 0-2. His assist came at a key point, as he finally found a red shirt in Diaz to level the evenings score.

Starting once more, and perhaps needs that rest more than others. Had a torrid time in the first half, and was constantly targeted in behind. Was caught goal side for the first, and beaten to easily for the second. Looked more composed after the break.

He started once again, because he quite simply has to, due to his vital importance. He looked harassed and unprepared through the first half, as the home side swarmed his backline. Started to rule the backline after the break, as Liverpools game picked up.

The European starter came in once again. His positioning wasn’t as targeted as the left, and was the more steady of the defenders in the first half. Continued his good game in the second half, as Liverpool dominated more and more.

Comes back after very limited weekend minutes, and perhaps that loss of rhythm showed. Was played through, and bypassed in the first half. He took matters into his own hands with a rasping striker through the keeper, as he and his midfield partners began to run the game.

The maestro is perhaps the most important reds midfielder, and came in to help control proceedings. That didn’t work at all in the first half, as the Spaniards came for everything in that first half. Had more of the ball, as control entered their second half display.

Starting once again, his importance is now unwavering. The first didn’t go his way at all though, and a loose pass saw Villarreal nearly score. The whole midfield seemed shocked by the home side, and half time was a blessing. The tough first period was replaced by a very fine second half performance, as he started to demand the ball. Assisted for Mane, in a complete turnaround of his game.

The writers footballer of the year, and Liverpool’s top scorer returned after a mini break. He had a couple of chances to break, but Liverpool looked too long, too often. He couldn’t settle in the first half, and play needed to be more constructive for him to shine. Prodded away, and lined well on the right as Liverpool gained confidence.

The reds starting 9, he is now a certainty for the biggest games. He was dragged about, bullied by Albiol, and couldn’t get a foothold in the first half. Was busier and happier after the break, with true width in Diaz to his left. A great goal ensued, with brilliant play to bring his score up, and secure the tie.

The natural scorer for all stages, he started once more as the reds searched for that vital third goal. That didn’t happen, and he looked a luxury the reds couldn’t afford.

Gave a genuine threat, and was able to impose his game with an ability to stretch the Villarreal backline. Got his goal after a great ball by Trent, and changed the game.

Got Capoue sent off, nice.

Came on when control and the score line was secured.

Came on to relief a tired Robbo.

A nice few minutes for the veteran.

Started the game with an ultra string and attacking line up, and he clearly hadn’t expected such a swarming first half approach by Villarreal. He made a tactical change to bring in Diaz at the break, after the most uncontrolled half his reds had produced this season. However undercooked his team started, he made the right call at the break, and managed the second half like the world class coach he is.