Home » Will Chicago Bulls make any difference with 3 NBA All-Stars? Will Chicago Bulls make any difference with 3 NBA All-Stars?

The Chicago Bulls are definitely after something big, landing DeMar DeRozan, Lonzo Ball and Alex Caruso during the off-season, bigger than convincing Zach LaVine to sign a contract extension when they traded for Nikola Vucevic in the second half of last season.

It may not sound like it, but the Bulls have their own version of the “Big 3” now: 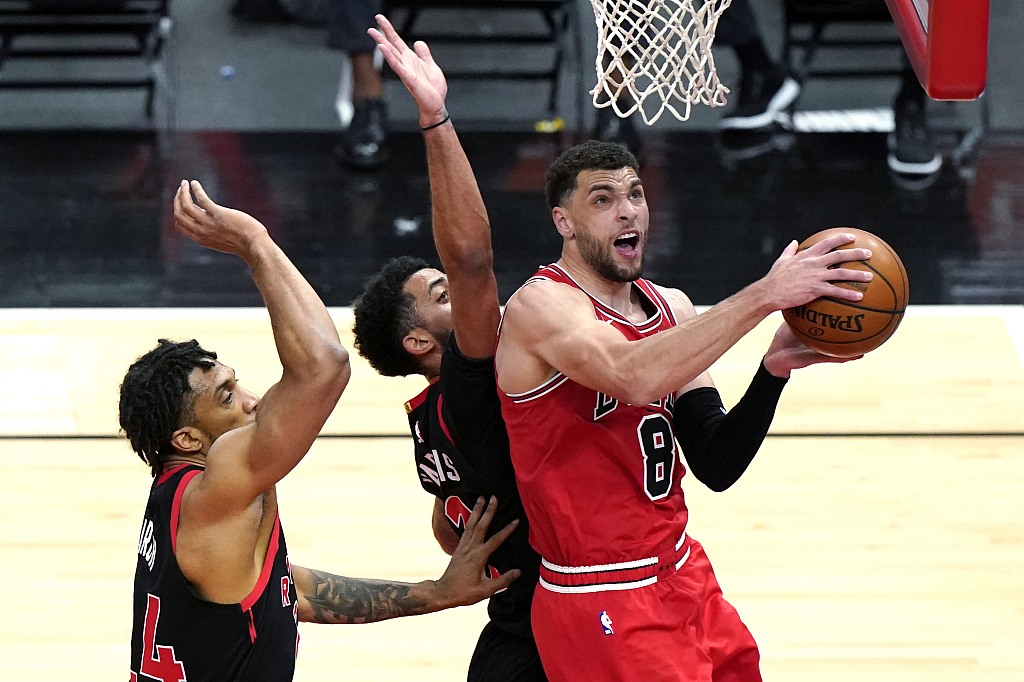 Zach LaVine (#8) of the Chicago Bulls drives toward the rim in the game against the Toronto Raptors at United Center in Chicago, Illoinois, U.S., May 13, 2021. /CFP

If you put Ball into the starting lineup, you will see the Bulls have four starters with the following stats from the 2020-21 season:

Moreover, the playstyles of the four fit each other quite well. LaVine is the productive scorer who can ignore defense; DeRozan is the isolation choice in the middle range with decent orchestrating ability; Ball is a big point guard who doesn’t have to hold the ball in his hands too much and a reliable 3-point shooter; Vucevic has the complete offensive weapons of a big man and he can stretch the spacing for the team.

Bulls fans will no doubt be eager for the new season to begin now. 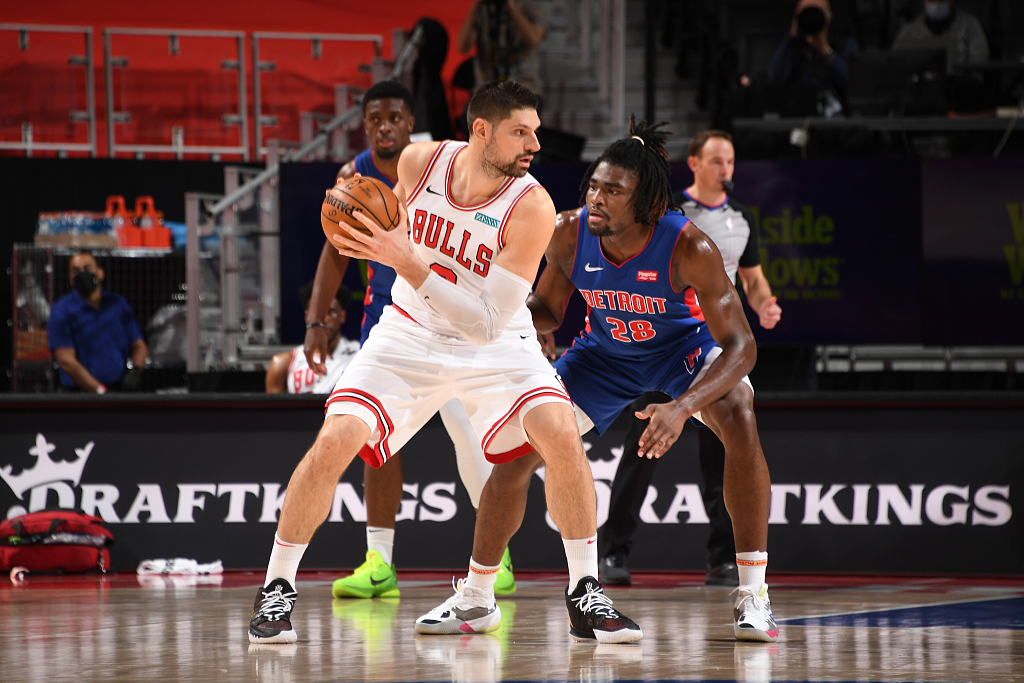 Nikola Vucevic (L) of the Chicago Bulls posts up in the game against the Detroit Pistons at Little Caesars Arena in Detroit, Michigan, U.S., May 9, 2021. /CFP

But there are reasons why they shouldn’t get too excited. For example, of the four only Vucevic played five playoff games in the past two seasons. The other three played a grand total of zero.

DeRozan only had one “plus” season in Defensive Box Plus/Minus (DBPM), having played 12 years in the NBA. LaVine had none. Both must be on the court for at least 35 minutes per game for the sake of the team’s offense.

Things look even worse if you go into the details. Vucevic was exposed as more of a guy to tussle with the opponents’ big man for rebounding instead of a true rim protector. LaVine has never been a qualified defender in his career; neither has DeRozan, not to mention that he will have to play as a small forward and face guys who are always bigger and stronger than him.

Usually it takes an elite defender in the power forward position to save such a squad, but the Bulls have no player of this type. 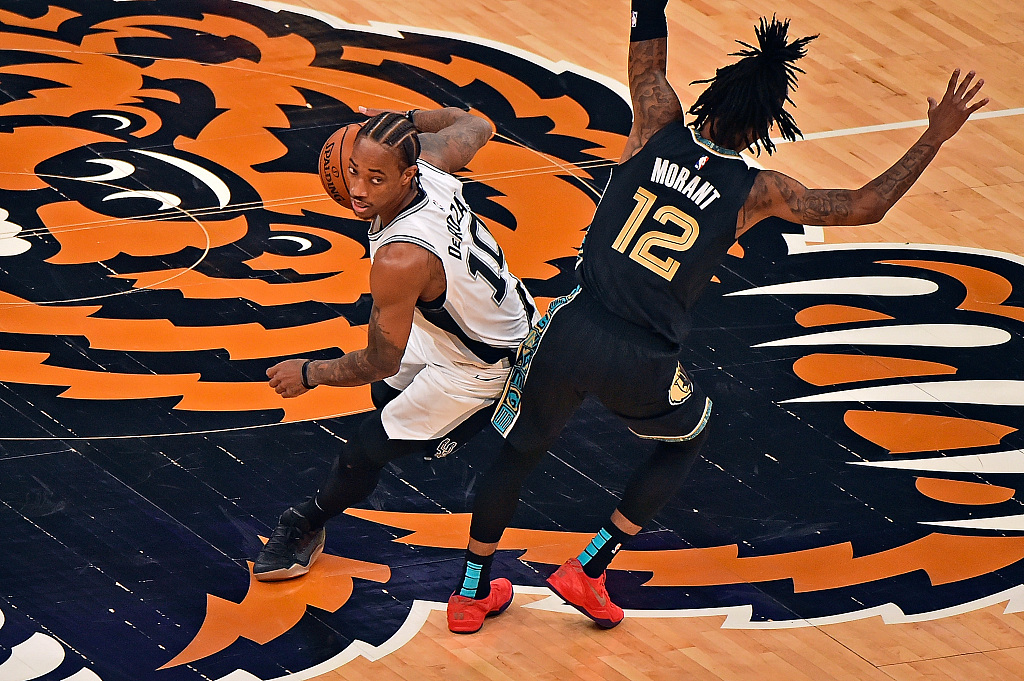 DeMar DeRozan (#10) of the San Antonio Spurs beats Ja Morant of the Memphis Grizzlies in the NBA Western Conference play-in tournament game at FedExForum in Memphis, Tennessee, U.S., May 19, 2021. /CFP

Neither are they able to make a balanced squad. As mentioned earlier, LaVine, DeRozan, Ball and Vucevic are likely to appear in the starting squad. But the question is, who will join them? Caruso should be considered in this but he is a back-court player, just like Ball, LaVine and DeRozan. Derrick Jones Jr. may be another option but he is still undersized to play as a power forward.

There is more cold water to be thrown on Bulls fans if they look at the environment in the Eastern Conference. The Brooklyn Nets, led by Kevin Durant, James Harden and Kyrie Irving, the defending champions Milwaukee Bucks, plus Joel Embiid and the Philadelphia 76ers will occupy the top three spots of this conference. The Miami Heat may not match those three teams but they are above the rest in the East. Trae Young and the Atlanta Hawks just made the Eastern Finals last season and they have kept a very young, competitive roster. The New York Knicks were No. 4 in the regular season and had a top-2 defense of the league. The Boston Celtics are in an awkward situation but their star duo, Jayson Tatum and Jaylen Brown have a way more balanced combination of offense and defense than DeRozan-LaVine.

That’s already seven teams that are surely better than the Bulls. The NBA will continue to arrange a play-in tournament for playoff qualification. That means the Bulls may face the Indiana Pacers, the Washington Wizards or the Charlotte Hornets. How confident are the Bulls that they can absolutely beat any of the three in a one-game series? Lonzo Ball (back) of the New Orleans Pelicans defends LaMelo Ball of the Charlotte Hornets in the game at Spectrum Center in Charlotte, North Carolina, U.S., May 9, 2021. /CFP

The Bulls have reasons to act anxiously after missing the playoffs for four consecutive seasons – exactly since LaVine was traded here for Jimmy Butler. But building a Big 3 with no first-class player won’t necessarily give them what they want, especially in today’s Eastern Conference.

If the Bulls’ goal is to make the post-season and use that to convince LaVine to stay, they may be able to finish the first part before praying that LaVine is attached to the wind and pizza of the city. Nonetheless, if the Bulls want to chase a ring, they may be wishing for too much.